“Spiteful analysis with no grasp of leftwing politics,” is how Zoe Williams of the Guardian described Rosa Prince’s Comrade Corbyn: A Very Unlikely Coup in her review and she says that the book is  “a flawed account of how Jeremy Corbyn stormed to the Labour leadership”. The rest of the review/article can be extracted as follows: Rosa Prince, the online political editor for the Telegraph, was an interesting choice for Jeremy Corbyn’s biographer, and when I say “interesting”, of course I mean “perverse”. It is a bit like asking Owen Jones to write a biography of David Cameron: no one would doubt his gusto, but there would be the wrong circle, wrong age, wrong hinterland, no friends of friends of aunts of friends and, crucially, Cameron’s associates would be immensely suspicious of Jones, as Corbyn’s are of Prince. It would avert the danger of a hagiography, but at the cost of any close-quartered insights. All the reminiscence is hacked from articles that have already been published, mostly in the Daily Mail. Prince pores over an incident when Diane Abbott, then Corbyn’s girlfriend, was sighted by friends in his bed, wrapped in a sheet. It’s not a new story though it appears to be a new account, its prurient inclusion justified on the Laura Kuenssberg defence (“I’m a journalist, and I found out a thing”). END_OF_DOCUMENT_TOKEN_TO_BE_REPLACED

The Death of New Labour

Peter Hyman argues in yestderday’s Observer that This is an existential moment in Labour’s history. It may not survive. And it may never win again. As he says: The story starts with a landslide victory, a sense of hope throughout the country, great achievements including the first minimum wage, peace in Northern Ireland, civil partnerships. And ends with the bitter aftermath of the Iraq war, a succession of unelectable leaders and the toxicity of the Blair brand resulting in the Blairite candidate getting just 4% in the most recent leadership election. Some other parts of the article are extracted below: New Labour played into the hands of those who were desperate to call it an aberration. It allowed those, like Neil Kinnock, to say, on the election of Ed Miliband, that “we’ve got our party back”. It paved the way for the most successful Labour leader in history to be written off as an interloper, a cancer in the bloodstream of Labour politics. Looking back, this was perhaps New Labour’s most fundamental weakness. Without roots, without establishing its own traditions, cultivating its own sustainable culture, drawing on the stories and figures of the past, New Labour became unnecessarily fragile, the cult of one person, not a movement of hearts and minds. New Labour may be dead. END_OF_DOCUMENT_TOKEN_TO_BE_REPLACED 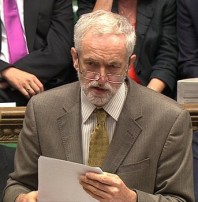 In The Corbyn earthquake – how Labour was shaken to its foundations, Patrick Wintour and Nicholas Watt of the Guardian analyse and deconstruct the new Labour leader Jeremy Corbyn. In fact, the pair of weighty journalists offer what they rather interestingly term the: The inside story – from the candidates and advisers – of how Jeremy Corbyn’s Labour leadership campaign delivered the political shock of a generation. Even the personal plea to Labour voters made by Tony Blair to keep the left down created zero results to dump Corbyn. PIIA agrees with Corbyn that Palestine must be given the right to self-determination. As Wintour and Watt explain: Watching from the sidelines as Corbyn stormed ahead, Tony Blair had become increasingly anxious that his legacy was being trashed. On the day the YouGov polls were announced, Blair was due to speak at a Progress event at the Institute of Chartered Accountants in the City of London, marking the 21st anniversary of his election as Labour leader. In front of an enthusiastic pro-New Labour crowd, Blair argued that not only was Corbyn incapable of winning a general election but that his approach to politics was deeply misguided. Labour, said Blair, needed to realise that “radical leftism was often quite reactionary … I wouldn’t want to win on an old fashioned END_OF_DOCUMENT_TOKEN_TO_BE_REPLACED