The Pakistan Institute of International Affairs (PIIA) organised conference on ‘Kashmir, the Way Forward’ which was held on 29-30 January 2020: see our coverage on Pakistan Horizon Blog here and here. Numerous dignitaries spoke at the event including Dr Masuma Hasan, IA Rahman and former Ambassador and Foreign Secretary of Pakistan Riaz Khokhar. The videos from day one and day two of the Conference are available below.

Muhammad Munir: From Jinnah to Zia

Muhammad Munir was the Chief Justice of Pakistan from 29 June 1954 – 2 May 1960. He did not believe in democracy and the rule of law. He believed that Pakistan was best run from the top down by the civil and military bureaucracy. He destroyed democracy in Pakistan by giving a series of poor judgments favouring the Government, the first of these being Maulvi Tamizuddin Khan PLD 1955 FC 240. Later in The State v Dosso PLD 1958 SC 533, Munir set out to develop the manacles of the doctrine of necessity even further by validating and upholding martial law. His book From Jinnah to Zia where he appeared to regret his judgments can be read here.

Addressing a lecture on “Kashmir: a nuclear flashpoint” organised by The Pakistan Institute of International Affairs (PIIA) in its library, Dr Rabia said the issue of Kashmir later was taken over by what was happening in Syria with the Turks and the Kurds and the Middle-East and then the Trump with his tweets gained all the attention.She said, “We needs to keep the world involved in Kashmir in the same way as the prime minister addressed over the issue in UNGA.” Recalling an interview of General Khalid Kidwai who was the founding Director-General of Strategic Plans Division which was the Secretariat of National Command Authority and served the post for around 16 years, Dr. Rabia Akhtar said General Khalid Kidwai gave four red lines for Pakistan which if crossed can push Pakistan to contemplate the use option of war including special threshold, military threshold, economic threshold and social-political threshold. The full report with photography by Farhan Khan is here.

If we do not have a reasonably competent, friendly government in Kabul, nothing the west achieves will last. Ignoring the Afghan nation’s needs is not an option

This week’s comment in the Observer calls for a more inclusive role for Pakistan than the one recently articulated by Washington. Comment as follows: Donald Trump’s view on the conflict in Afghanistan was highly critical in 2011 when he tweeted that the US was “wasting lives and money” there. He later termed Barack Obama’s strategy a “complete waste”, saying it was “time to come home”. Trump stood on his head last week, ordering the deployment of additional American troops and committing the US to an open-ended war that he vowed to “fight to win”. So which Trump is right – the pre-election sceptic or today’s ardent warrior? The answer is neither.

When Obama took office in 2009, he raised US troop levels to around 100,000, part of a Nato force of about 150,000. His plan was to turn around a war that had already dragged on too long, then hand over to better-trained and equipped Afghan army and police forces. The handover duly took place in 2014, but the conflict was not over. Since then, security has steadily deteriorated. Obama was right to try, and Trump wrong to prematurely scorn his efforts. But what the 2009 surge ultimately proved was that even the most modern armies, wielding the latest weaponry and backed by unchallenged air power, cannot wholly overcome the sort of unconventional, guerrilla campaign at which the Taliban excel. More than 2,400 US soldiers have died in Afghanistan since 2001, and more than 450 British troops. But according to US estimates, government forces now control less than 60% of the country. END_OF_DOCUMENT_TOKEN_TO_BE_REPLACED

This is a fantastic book review in the Guardian (1 July 2017) by Owen Bennett-Jones.

The investigative reporters have produced a revelatory work about al-Qaida members in hiding in Pakistan and Iran between 2001 and 2011. At the time of the 9/11 attacks on New York and Washington, Osama bin Laden was in an Afghan cave, unable to get a decent TV satellite signal and forced to follow developments on the radio. The contrast between his situation and his impact was to be a theme of the next decade until, eventually, the Americans caught up with him in the raid on Abbottabad, Pakistan, in May 2011. It’s a decade that The Exile describes with a remarkable amount of impressive new detail.

Investigative reporters Cathy Scott-Clark and Adrian Levy start with a detailed account of Bin Laden’s movements. When the US air strikes began, he flitted through various locations in Afghanistan, all the while trying to manage the movements of his wives and children. He was on his way to a meeting with Mullah Omar in Kandahar on 7 October 2001 when a US drone came close to killing them both. From there he moved to an underground complex in the Tora Bora mountains near the Pakistan border. The US assaulted Tora Bora but, again, Bin Laden managed to slip away, and on 14 December 2001 he turned up in the Pakistani city of Karachi. Feeling too exposed there, he moved back to Afghanistan in February 2002 before reaching northern Pakistan in the summer. There he lived with one of his wives, Amal, and their nine-month-old daughter Safiyah in the remote village of Kutkey, home to the in-laws of his courier and guard, Abu Ahmad al-Kuwaiti. END_OF_DOCUMENT_TOKEN_TO_BE_REPLACED

Observer: WhatsApp warriors on the new frontline of Kashmir’s conflict

This is fascinating reporting from the Observer (9 July 2017) on the unrest in Kashmir:

It started with a phone call from a dying militant that went viral. Now angry, educated youth, inspired by social media, are demonstrating in their thousands. The young militant would be dead in a few minutes. Indian security forces had the house surrounded. As they closed in, Muzamil Amin Dar made a phone call.

“There is nothing to worry about,” he is heard calmly telling his family on a tape of the call. “Sooner or later we all have to face death, isn’t that right?” He falls silent; the recording ends in a shrill chorus of women’s screams. 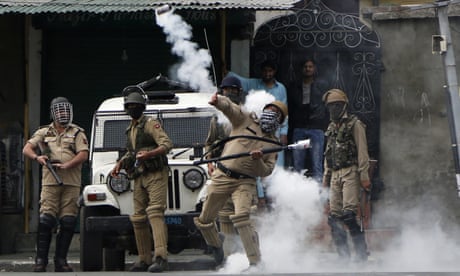 The killing of the commander from the militant group Lashkar-e-Taiba in October 2012 looked like any other death in the 27-year insurgency that has racked Indian-controlled Kashmir. What made it different was barely appreciated at the time. Days after Dar’s last conversation with his family, the recording of the call began to circulate online, spreading like wildfire across the Kashmir valley. Uploads to YouTube were played tens of thousands of times. Within months, copycat “last calls” from other dying militants began to surface. A trend was born.

It was one of the earliest interventions of social media in a conflict that has been transformed by technology. Unlike the shadowy militants of the 1990s, Kashmir’s new crop of anti-India fighters are WhatsApp warriors, achieving with selfies what they have struggled to do with guns. In the hands of young Kashmiris, the internet has become a weapon: images of dissent met by teargas and bullets in the street are flourishing online. END_OF_DOCUMENT_TOKEN_TO_BE_REPLACED

Israeli Settlements Have “No Legal Validity”

On 23 December 2016, United Nations Secretary-General Ban Ki-moon welcomed the adoption of a Security Council of Resolution 2334 (2016) which states that the establishment of Israeli settlements in Palestinian territory occupied since 1967, have “no legal validity,” constitute a “flagrant violation” under international law and are a “major obstacle” to a two-State solution and a just, lasting and comprehensive peace. “The resolution is a significant step, demonstrating the Council’s much needed leadership and the international community’s collective efforts to reconfirm that the vision of two States is still achievable,” the UN chief’s spokesperson END_OF_DOCUMENT_TOKEN_TO_BE_REPLACED